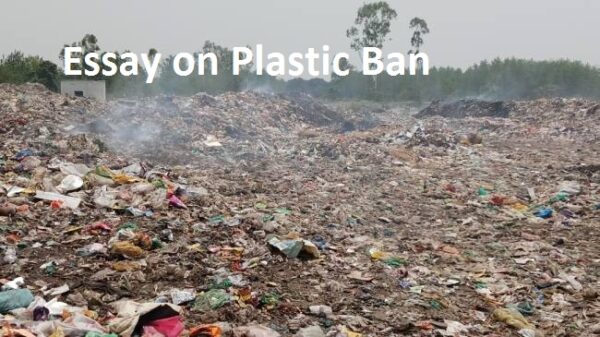 If we see plastic, then there is an important role of environmental pollution. If seen, then the plastic we use neither rots nor does it rot, it is non-biodegradable. In this way, these plastic bags lie for many years. Lives and pollutes the environment there. That is why the government and many other organizations demand a ban on it. One day this unnecessary using plastic bag will ruin the entire planet of Earth.

To avoid this, many countries have completely banned plastic, and biodegradable and paper bags are being used for use in place of plastic. At present, plastic bags are being banned completely. Whether or not this question comes in the minds of people again and again, because in the present time people

have become aware of the harm caused by plastic.

This raises the question of how safe our future generations are from the pollution of this environment. For the first time plastic was made from coal tar in 1909.

The disadvantages of plastic bags are as follows, which are given below –

Harmful to all living beings on Earth

It is a matter of concern for all the living beings living in water and on the earth that how to avoid or reduce this pollution. Like many animals who roam here and there, and also of plastic sticking to the food lying on the ground. They consume it which is harmful for their digestion. Organisms living in such seas also become victims of this type and eventually they die. This has been a major reason for the damage caused by plastic.

Many dangerous chemical gases are released from the pile of plastic lying in the garbage, which is very harmful for human health. Many people die because of this.

In a way, people put the plastic bag along with the used waste from their house in the drain in front of the house, due to which it takes the form of toxic gas and if any person goes to clean it, then its gets caught and they die.

Often, due to the waste plastic bags lying in drains and sewers, the sewerage hole gets clogged and due to excessive rain during the rainy season, problems like floods start to arise, which affects the life of the people.

The main reason for vandalizing plastic is to face trouble for all living beings living in land and water. For this the government takes many strict decisions so that everyone can be freed from it.

If we want to avoid the disaster caused by plastic bags, then we have to make the ban imposed by the government successful. Only then our life will be worth living in a pure environment and animals can be saved from dying.

By the way, plastic bags have been completely banned by many states in India. But people still have the habit of carrying plastic bags as before. The state government has not banned for a long time because plastic in the shop. The bag is not available for some time, and then it starts getting available later.

We have to avoid all this by using dangerous spreading disease and dying animal’s plastic bags which are non-biodegradable at this time. We have to deal with this ban with full force and cooperate; especially the educated class people make this campaign successful. Do it in making. Because we have to support, this restriction of government like a responsible citizen.

How can People Contribute?

We can save the use of plastic by conveying this feeling to other people, so that other people can also feel safe.