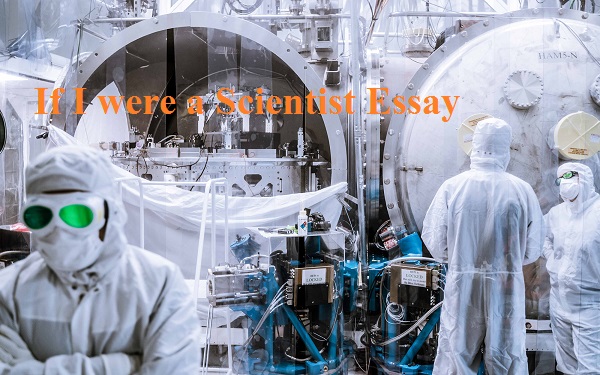 Talking about today’s era, the whole human life is dependent on the technology of science. That’s why we can also call it the scientific age. Science has a very important contribution in the progress of this world. In today’s era, it is undoubtedly a matter of great pride for any person to become a scientist and work for the interest and good of his country.

The talent of scientists in India has been proved capable in the world from ancient times till today, many Indian scientists have played an important role in various branches of science, discoveries and researches.

If I was a scientist, then India would try to make India capable of having a different importance in the world with its skill in the field of science.

My Thinking about Science

If I were a scientist, I would have taken my experience to the new generation so that we do not let us forget the tradition of our old scientists and mathematicians. Because the new generation can do the welfare of the human tribe by solving the old riddles. Nowadays science has progressed so much that due to new technology, developed country sells weapons to other countries, which is equipped with modern technology. But it also causes conflicts between each other’s countries.

Due to the increasing technology of science, every country wants to become bigger and world guru than other countries. On the other hand, due to the medicines manufactured in laboratories, the technology of science has been successful in defeating dangerous diseases like epidemics. If I were a scientist, I would have tried to work in the interest of the welfare of the world by not taking human beings on the path of destruction.

My contribution as a Scientist

What is the importance of scientist in the field of science, today’s world has been known to all. If the recent example is taken, then a global epidemic like COVID-19 came in the whole world, which caused havoc all over the world. But due to the hard work of all the scientists of the world and the technology of science, it has been controlled to a great extent. But still the efforts of scientists are going on to eradicate it from the root.

If I were a scientist, I would have taken science towards further progress, worked for the welfare and development of the people so that the life of the people could be made accessible.

By the way, in the field of science, different scientists have saved the whole world with their inventions. A great scientist like Newton discovered the force of gravity, which is still taught in colleges, schools today. Similarly, Thomas Alva invented the edition bulb, which has given light one of the most important things in today’s time.

Similarly, as a scientist, we will also try to do such work so that one can identify me in the field of science and make difficult things easier for people with my invention.

Certainly the thinking of our science is different from a common thinking. One who thinks of new inventions and implements them.

In today’s era, science will also be considered as the era of communication revolution. Through this science and scientific activities the life of a common man has become easy. Due to all this work, we feel proud that due to the greatest of many great scientists, many facilities have been received.

Even today, many scientists are engaged in pursuing new achievements and research. Looking at all this, I think that if I were a scientist, I would have thought to move forward with new inventions with new technology, and would dedicate a small part of his participation for his country to the country.

Being a scientist is a matter of pride. The scientists of our country stand firm like a strong pillar. Due to which it becomes easy for common people to live life.

Considering us in scientific form, we should cooperate in good work for our country. Because our unity helps the scientists of our country to move forward, so we should keep cooperating.