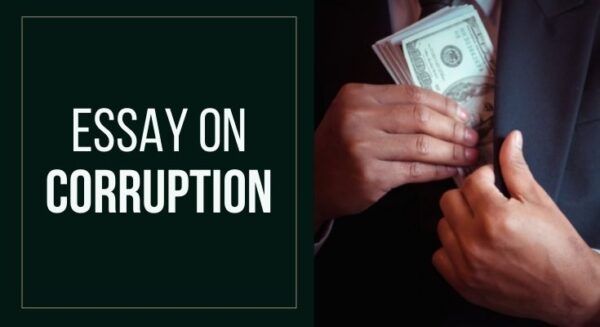 People in today’s time do things like corruption to get success and along with success, to earn them a lot of money in less time and less hard work. Some people today are taking the path of corruption to fulfill their dreams.

How does Corruption work?

There are many forms of corruption, entrapment, bribery, tax evasion, cheating in exams, selling question papers of examinations, passing students by taking money, giving high marks, helping someone with bad money by taking money, etc. is a form.

Corruption is increasing rapidly in our country, if it is not stopped then corruption will engulf the whole country.

The reason for increasing corruption is inflation, being less educated, not getting a good job and there are many other reasons. Corruption is a bad habit, we have to leave such work and habits.

A person who walks on the wrong path to achieve his success is a corrupt person. Man chooses the path of corruption due to many reasons, financial trouble, social trouble and for his greater progress.

If our position is not increasing in our office, then our salary will not increase, we do not want to work hard to increase our position, so now we fulfill our desires by giving bribe, this is also a corruption.

Even after getting good education in schools, students fail, so parents of many students take successful results by giving bribe, this is also a type of corruption.

Due to which that student remains illiterate even after taking the result sheet and goes ahead and adopts the path of corruption.

At the time of elections, votes are bought by making big promises and with money, and after winning the elections, they forget their promises, this is also a type of corruption.

In big offices and companies, jobs are being given by taking money, which does not come to anything and good students who are intelligent, they are eligible, they cannot get a job because they have only knowledge, no money.

This is also a type of corruption, which is very much needed to stop otherwise our country will never be able to develop.

Problem and Solution of Corruption

Not seeing the right in a person’s conduct makes him corrupt. Throwing light on this, then the person who does not behave properly is immoral and of wrong conduct.

When we live in the society, without thinking in the way of justice and not following the wrong rules, we take our rude decisions and when the conduct becomes bad then it is called completely corrupt. He uses this type of behavior for his own benefit.

Then informally sees his own benefit from this corrupt practice. Corruption is such an issue which has settled in the mind of the society and the family. Because of such a mind, a person thinks of wasting the resources of the whole people for the sake of getting even the smallest benefit.

The purpose of such corrupt is to misuse their power and authority through any means, whether it is formal or informal. In the name of the laws of the country, when the files of good and noble works of the people keep hanging in the government office, then using their power will give commission.

Corruption is a social insect which is slowly hollowing out the society and giving a lot of damage to the nation. To eradicate this in our country, the political person and the upper and powerful people of the society will have to come forward and take some concrete steps to call themselves the most jurist and power.

This web of corruption is very big which has been affected by every wrong life. Any MLA or MP of the area, he is called corrupt in any way in his own life in any natural or unnatural way.

Because of the wrong result of these corruptions, honesty and truth have vanished from the whole world. Working and getting the work done illegally is now over. Eradicating this wrong happening in the country has become a big issue.

Selling, taking adulterated goods, giving bad goods in goods, doing wrong religious behavior, such side effects are happening now. Corruption is no less than a spreading disease. To put an end to all these corrupt and wrongful work, the government should prepare a plan of brutal punishment.

Due to corruption, the situation in the country has become such that a corrupt person is taking money in a wrong way and such a person has no fear of any kind of punishment. There is no limit to the conduct of such corrupt people.

There is a great need to stop corruption. Otherwise our country is becoming hollow, because the deserving person is not getting work or help according to his ability. Due to which corruption is increasing.

The person suffering from corruption cannot be cured under any circumstances without being punished.