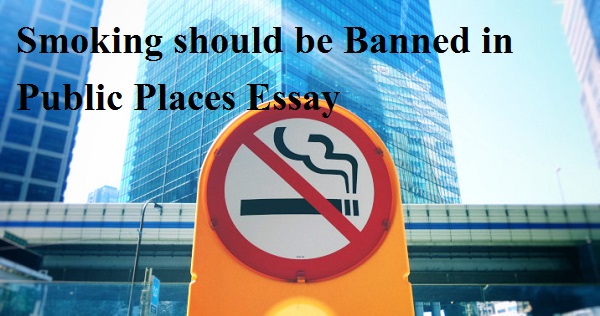 Smoking is a social evil, which is becoming a bad habit for our society. Some people are not even ashamed of the cleanliness campaign in the country and they keep smoking and spitting anywhere. Efforts are being made to destroy such evil from the society.

Some people are so addicted that they cannot live without cigarettes. He steals, threatens and misbehaves with other people after people are intoxicated because of this kind of addiction. It is seen in many places that nowadays people get to see the amount of drugs in cigarettes. The main reason for which is a dangerous harm to the people and later it dies in excess.

That is why it is complained by many organizations to eliminate it from the root because they are making the society hollow and empty. Due to these reasons, smoking in public places should be banned and at the same time harsh punishment should be given.

Why should Smoking be Banned in Public Places?

Nowadays it is seen that many types of diseases are seen spreading in open places or places. Due to smoking in the open by people, these deadly diseases affect each other and healthy humans also get affected by that thing.

Due to smoking, there is a disease related to breathing in humans, affecting the lungs, heart disease and cancer. There is a matter of concern among people about the dangerous disease caused by all this, how to get rid of this thing.

Smoking not only harms those who use it, but the smoke from the smoke also harms those standing nearby who do not. Those who do not smoke are at an even greater risk because they have very little stamina to bear this thing.

Due to this deadly diseases like, headache, asthma, cough, burning in the eyes and many other types of diseases spread, the main reason for which is smoking. That who does not smoke and get affected by its smoke, such a phenomenon is called passive smoking.

If there are strict restrictions on this then people who used to suffer from passive smoking will feel completely safe from this thing. Young people and children will not adopt this dangerous addiction. Whenever a child or student sees a person on the way smoking, it is obvious that they can try to imitate that thing. For all this it has become necessary to ban public places.

By not smoking, the environment will also benefit, it will remain an environment of clean and clean environment. If someone smokes a cigarette in an open place, then its smoke mixes harmful gases in the surrounding pure air in many ways and makes that place impure. Therefore, if there is a ban on it, then there will be no problem in breathing pure air.

If smoking in public places is stopped, then it will prove to be good for the public. This smoking ban will save the lives of the people. According to a 2009 report by the US CDC, innocent people standing near a smoker are dying from diseases that are caused by secondhand smoke. Their only fault is that they stand near those drug addicts or pass through them.

Together we all should stay away from these smokers addicted people. Because of them innocent people are also losing their lives. The government should make people aware about health.

Strict action should be taken against those who violate this rule. And in all those places where people addicted to drugs keep smoking. All those marked places should be banned.