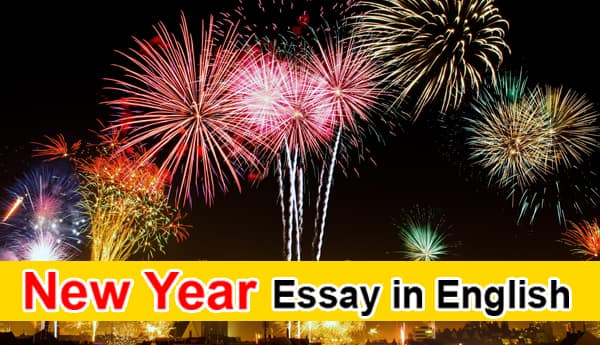 On the night of December 31, at 12 o’clock, the New Year starts celebrating. People of different religions live in India, so here people celebrate the New Year according to their culture and religion.

There are some important people who make resolutions on New Year’s Day, forgetting them not to commit old mistakes, think about starting something new on New Year’s Day. Every new year with new hope, new goals and new goals, Brings new dreams. Some people start new work in the New Year.

On New Year’s Day, some people go out with their friends to picnic, zoo, etc. Some people celebrate the New Year with their families by making a variety of dishes at home.

On this auspicious occasion, people keep a program of music along with dancing and singing at different places. Everyone dances and swings together.

New Year is celebrated on 1st January every year. Like every year, new brings with immense happiness in everyone’s life, new enthusiasm also brings. Most of the students give greeting cards to each other on the auspicious occasion of this New Year, and celebrate the New Year together

This festival is celebrated all over the world. Especially in foreign countries, the people there celebrate with great pomp; the way of celebrating abroad is different. Live broadcast is done on the night of 31 December, whatever the special program is, its broadcast is shown to all viewers.

Some people are eagerly waiting for this New Year, because the New Year comes a few days after Christmas day. On this 31st of December, everyone forgets everything and thinks about starting a new day.

The meaning of the New Year is that all of us together should take a resolution that does not hurt others. We should start the new work in a good way in the New Year.